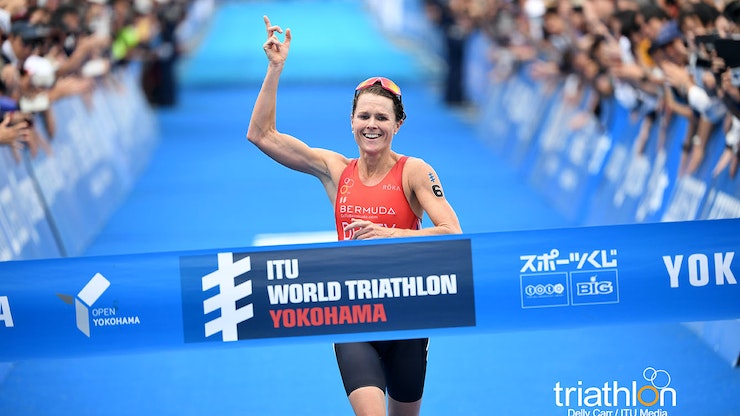 Bermuda’s Flora Duffy collected the first win of the Tokyo 2020 Olympic qualifying period on Saturday, landing another brilliant gold at the 2018 ITU World Triathlon Yokohama. Winning here for the second year in succession, it was also a second straight win of the season following her home-turf gold in Bermuda last month.

“Coming after such a high in April from the Commonwealth Games and Bermuda it was definitely a stretch to get here. I am very happy with my race, I often don’t get enough credit for my running, I came off the bike with a group of really strong runners,” Duffy said of her win.

Duffy continued her streak of strong race consistency from start to finish after leading out of the swim, remaining in the lead bike pack and then stealing the race away in the run, which ultimately left her at the top of the Series leaderboard in the WTS rankings.

“That is very cool, I was not expecting that today, that was not the goal. It was just to get a good score and set myself up for the Series, but if I am top then I can’t complain,” Duffy added after finding out her Yokohama win left her top of the Series.

Claiming the silver medal was USA’s Katie Zaferes who also collected her second straight WTS podium of the season. Non Stanford (GBR) finished with the bronze, her first WTS podium since 2016.

Zaferes said of her silver-medal performance, “I am so excited, I feel like I was in good form and I also was a little tired after Bermuda, that second lap on the run I was feeling real rough. Thankfully I brought it back together for the third and the fourth (laps) so I am really happy with it.”

The Yokohama race was the opening race of the two-year Olympic qualification period, and a slight chop in the water welcomed the women as their dive officially kicked off the long road to Tokyo 2020.

Two 750-metre laps awaited them in the second standard-distance race of the season, and USA’s Summer Cook pushed ahead in the first, getting the time stamp before the second dive. Duffy remained right on her heels, though, and in the second lap she overtook the leader to exit the waters first into transition for only the second time in her career.

For the first lap on the bike it looked like Duffy and Zaferes might keep a successful breakaway as they created a gap out of T1, but with one of nine returns completed and Great Britain’s Jodie Stimpson pushing, a pack of nine women joined the front duo.

While some strong names remained in the main chasing group, including Australians Ashleigh Gentle and Charlotte McShane, they couldn’t find the edge and close the gap, which remained around the minute mark for the duration.

Despite a few attacks from Duffy through the final laps, no further breakaways stuck and the leading nine rode into the second transition together, the gap to the chase now 1:14.

After a tough ride, Stimpson and Duffy were the first and freshest out of the transition gate followed by Zaferes. Then Duffy and Zaferes overtook Stimpson and once again were locked side-by-side out front.

Duffy wasted no time in showcasing that she has also become one of the top runners in the field. The Bermudian blasted away from Zaferes in the first lap and never looked back, holding onto a lead that was never truly threatened. Duffy entered the finish chute in control in Yokohama for the second year in a row, this year capturing the fastest run split of the day at 33:26.

Zaferes stayed strong in the silver position and never faltered, finishing 33 second behind Duffy to improve on her Bermuda bronze in April.

It was an impressive run by Stanford that secured her the bronze medal, bypassing Stimpson to take control on the 10-kilometre course and hold on tight to the final podium position, something she hasn’t managed since WTS Cape Town in 2016 following two hard years of injuries.

“In all honesty I spent last night Googling job applications and I was reading this morning what I have to do for this particular job, I just didn’t expect that today,” said Stanford. “It has been a really tough two years, I have gone through a lot of up and downs. This sport can be super cruel and super tough, but it has just taught me that if you stay patient and keep plugging away, you can get back up there really.”

Australia’s Ashleigh Gentle had a noteworthy performance with one of the fastest runs of the day. Coming off the bike with a deficit of 1:14, she was able to find her way into fourth place